As you can see, I have a brand new website! This website was built by benbutler.art . This new website is part of a larger rebranding effort.

In June 2019 I moved to Williamsburg, VA. I intend to continue coiling here and make new friends and contacts in the arts and crafts scene in the tidewater area of Virginia. I plan to return to Southern Maryland for shows and classes, so please continue to contact me if you are interested in a class or want to pick up a special gift at a show.

If you are finding my website and/or visit near Williamsburg, please look for me at local venues, or contact me if you’d like to take a class. I can’t wait to share my baskets with you!

In 2017 I had the pleasure of teaching three pine needle coiling classes at the Mattawoman Creek Art Center.  In June I taught Beginning Pine Needle Basketry where we made small baskets on walnut slice centers.  This is a picture of some of the beautiful baskets under construction. 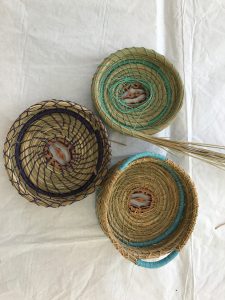 In October I taught Pine Needle Jewelry with a large group of enthusiastic students who produced bracelets and pendants.

In November it was Pine Needle Ornaments.  Below are some of the bell ornaments and mini baskets under construction. 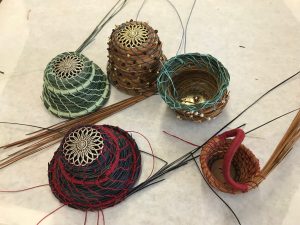 Teaching the coiling classes has been a wonderful experience for me.  I get to teach something I love and meet wonderful, creative people in the process!

I hope to have the opportunity to teach more classes in 2018.  I will be starting with a Beginning Pine Needle Basketry class this spring.  Please let me know if you are interested!

How long will a pine needle basket last?  At a craft fair in 2014 I was approached by a wonderful woman whose grandmother used to make pine needle baskets.   Two of the pieces, a trivet and a napkin holder, needed a bit of repair.  Could I do it?  We estimated that the pieces were between 40 and 50 years old! 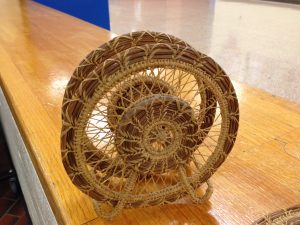 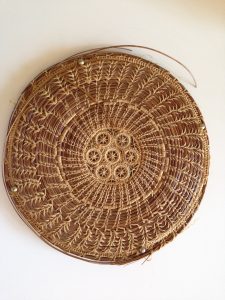 They were beautifully coiled with raffia and finished with shellac.  I don’t usually work in raffia, but I was eager to learn.  It took me a lot of experimentation to “age” my raffia so that it would match.  The biggest challenge I found, though, was that the old raffia cracked easily, which may have been due to the drying effect of the shellac.  I was able to repair both pieces, though, and we were both pleased with the finished result. 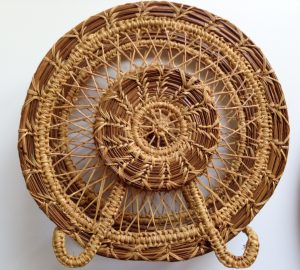 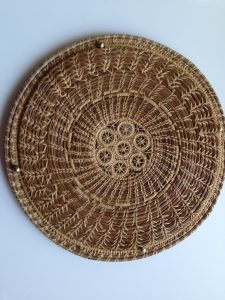 I am confident that these family heirlooms can now pass to another generation.

From this experiment I learned that I don’t want to coat my baskets in shellac.  I doubt that beeswax would cause the same cracking problem, so if I want them to have a coating at all, it will be beeswax.  Also, I definitely prefer working with waxed linen thread over raffia!  The traditional look of raffia is beautiful, and it offers possibilities for splitting stitches that linen doesn’t.  However, I love the strength and reliability of waxed linen thread.  It is a lot more expensive, but I think it is worth it.

A month ago, my mother discovered this basket in her attic.  She thinks it belonged to her mother, so I wouldn’t be surprised if it is more like 70-80 years old.  It was also coiled with raffia, but doesn’t appear to have been treated with shellac.  This one will be a big challenge, and since the base is rotting cardboard, I am thinking of making more of a tribute to the original rather than truly refurbishing the basket. 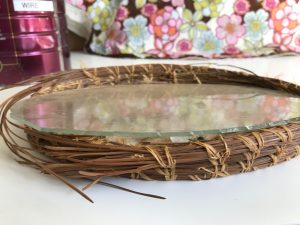 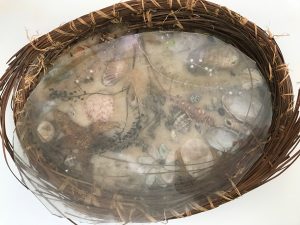 Seeing these pieces definitely gives me confidence that my baskets can last a long time, and hopefully, someone will find one in their attic at some point and say, “Wow! My grandmother made this 80 years ago!”

My interest in coiled basketry started more than 8 years ago when my husband and I visited Charleston, SC for our anniversary.  I was so excited to watch the women there coiling their sweetgrass baskets and had a hard time limiting myself to buying only a few.  Once we were home I tried to find some basketry classes.  I did a few kits with reed and woven baskets and eventually found a class through my local community college.  Although I enjoyed weaving baskets, I really wanted to learn to coil.  I never could find any classes in coiled basketry so I taught myself with the help of Judy Mallow’s wonderful book Pine Needle Basketry.  Eventually, I also found Nadine Spier’s videos and some tutorials on the internet.

Initially, I just tried to duplicate the baskets in pictures.  Now I enjoy starting with something in mind but allowing the basket to “grow itself.”  One of the things I love about coiling is that I feel like I am working WITH the materials. My Purple Slide basket (Gallery) is an example of a time when the materials didn’t want to go my way, so we compromised, and I loved the final result. I like weaving baskets as well, but when I am working with reed, I definitely feel more like I am FIGHTING the materials to see who’s boss!

If you are interested in coiling, here are some of the resources that helped me get started.  Pinterest is also full of wonderful inspiration as well as links to tutorials.  I have started my own Pinterest page of designs and tips that interest me.